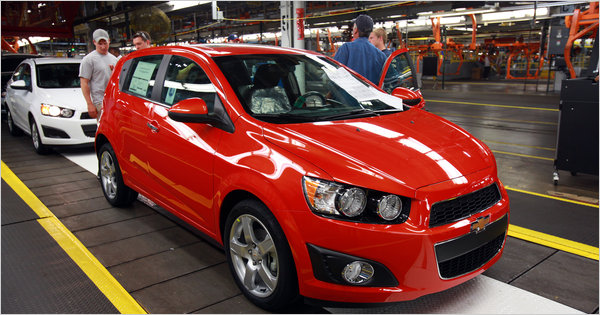 ORION TOWNSHIP, Mich.  The only subcompact car being built on American soil will soon roll out of an assembly plant here in suburban Detroit that is as unusual as the car itself.

The production line has been squeezed into half the space of a traditional plant. Welding robots are concentrated in efficient clusters, instead of being spaced along the line, while many of the workers earn half the typical union wage. Even the first coat of rust-proofing has been reformulated so that it is one-hundredth as thick as  and thereby cheaper than  the coating on other cars.

One of the oldest axioms in the auto industry is that no company can build a subcompact car in the United States and make money because they are priced too low. The Ford Fiesta is built in Mexico. The Honda Fit is made in several places, including China and Brazil. But with Americans  and Detroit  rediscovering small cars because of high gasoline prices, General Motors is intent on shattering that notion with its new Chevrolet Sonic. The car, with a base price of around $14,000, will give G.M. a new entry in the lowest tier of the market when it goes on sale this fall. The Sonic is also expected to be a breakthrough in establishing a new level of cooperation between Detroit and the United Automobile Workers.

The radically revamped factory here operates with fewer and cheaper workers, many of whom are paid $14 an hour rather than the full U.A.W. wage of $28 an hour.

The plant itself is smaller and reconfigured to save money, with company executives modeling some of the changes after G.M.s most efficient factories in Germany and Korea. The production lines footprint alone was reduced from a million square feet to 500,000  the equivalent of losing the space of more than two Wal-Mart Super Stores. The energy bill was cut by powering some operations with methane gas from neighboring landfills.

The Sonic will be G.M.s littlest, and most fuel-efficient, conventionally powered vehicle. It was conceived in 2008 before the federal governments bailout of the bankrupt automaker, when negotiators from the company and the union began brainstorming about what it would take to make a profitable subcompact car in the United States rather than in low-wage countries.

We wanted to prove we could do it, said Diana D. Tremblay, G.M.s head of global manufacturing.

The U.A.W. tried to persuade the Ford Motor Company to build the Fiesta subcompact in the United States. But Ford chose a plant in Mexico, where the combined wages and benefits of a production worker total less than $10 an hour. By contrast, a full-wage union member in the United States costs G.M. close to $60 an hour. Even an entry-level wage employee costs about $30 an hour in wages and benefits.

While it is not the only factor in producing a profitable subcompact, lower employment costs were critical to the decision to build the Sonic in Michigan. In a groundbreaking labor agreement, the union allowed G.M. to pay 40 percent of its union workers at Orion Township an entry-level wage that sharply reduces overall production costs.

The entry-level wage structure was an important enabler, because obviously the smaller the car the less the margin, said Ms. Tremblay.

The U.A.W.s president, Bob King, said the union considered the significance of a competitive subcompact to G.M.s overall product lineup. The Sonic is the first subcompact that G.M. has tried to build in its home market since the Chevrolet Chevette almost 40 years ago, aside from a brief joint effort with Toyota to build Geo Prizms. The smallest car in its lineup now is the Chevrolet Aveo, a subcompact developed by G.M.s South Korean subsidiary. A version of the Sonic to be sold overseas will be built in South Korea.

We are committed to the success of the company, Mr. King said recently. We had to talk about a business model that makes sense.

For all its promise, the Sonic still has to convince consumers that G.M. has found the right formula for an attractive and affordable subcompact. Previous subcompacts efforts like the Geo Prizm and the Aveo were bland and underpowered, and contributed to G.M.s lackluster reputation in the overall car market.

G.M. has a lot to prove with the Sonic, said Joseph Phillippi of the research firm Auto Trends . They have to cut costs but still put out a competitive car.

The car itself is a mosaic of innovation to make the Sonic lighter, less costly and more fuel-efficient, including high-strength steel used in its windshield pillars and the ultrathin film applied to prevent rust. The Sonic sedan resembles a shrunken version of the Chevrolet Cruze, while the hatchback version is distinguished by its short rear overhang and upright stance.

The Sonic weighs 500 pounds less and is eight inches shorter than the next biggest car G.M. makes, and its little 1.4-.liter turbocharged engine will deliver the best gas mileage in the companys fleet. It will be north of 40 miles per gallon, said Jim Federico, head of G.M.s global small cars and electric vehicles.

Still, to get the car to meet cost-saving goals, a team of G.M. engineers and manufacturing specialists also had to adapt and reconfigure the Orion plant, which opened in 1983 and was used to build big cars like the Buick Riviera. G.M. spent heavily in converting the plant, investing $545 million in new equipment and retraining workers  and it shows, from the gleaming floors to the banks of fluorescent lighting that brighten the plant and save $430,000 a year in energy costs. The plant is also the companys greenest, producing 80 percent less solid waste and using 20 percent less water, all at a savings.

Various stages along the assembly line, like the body shop and trim area, are more compact, with teams of six workers installing parts fed to them on automated carts by independent suppliers who operate inside the plant. That reduces costly inventory and improves productivity. Normally the suppliers would be five miles away versus 50 feet, said John Barry, a G.M. manager.

The plant over all employs 1,800, a reduction of 25 percent. To augment the small profit earned on the Sonic, the workers will also make the larger, more upscale Buick Verano on the same line. Overall capacity at the plant is 160,000 cars a year. Even the two shifts have been fine-tuned to four 10-hour days rather than the usual five-day week to better maintain the machinery and save energy.

Every dollar saved is essential for the Sonic to compete, auto experts said. And if the car is a winner with consumers  production begins in August  the Orion factory could become a model.

Join Date: Mar 2006
Location: Detroit, Michigan
Posts: 9,152
Saw a blue one yesterday, looks like a mildly updated Aveo at a glance. They should sell well