One of the classic Generation 1 Transformers is reborn from the 2009 Camaro Bumblebee Deluxe mold. Jin Saotome brings us this Custom Prowl, modeled after the 1980's classic Generation 1 Style. What really sets this piece off is the new head that was put on the figure. In the black and white style of the older police cars, Jin really brought the features that make Prowl a force to contend with! With these awesome G1 customs hitting eBay, Michael Bay should be taking notes for future Transformer icons to include in the sequel!

Jin explains this custom Prowl in more detail: "This auction is for an 6â tall custom Transformers âMovie Prowlâ figure and soon-to-be-made weapon. I ran out of time before my auction but he will come with a weapon or two. Iâll have them added to the description before the auction ends. Prowl has multiple points of articulation, far too many for me to count so Iâm not even going to try. This means you can pose Ratbat here in all sorts of awesome Deception-arresting poses and heâll look great in every one. He transforms similar to the Bumblebee 08 figure he was based on and changing his form around wonât affect the paint job at all. Instructions for the 08 Bumblebee are included.

This custom has been painted with an exceptional level of detail, and with paint thatâs not going to rub or flake off. Handle it, pose it, just donât give it to your little brother to play outside with. Youâll find that my custom figure designs are durable and look great as well. Now you can have the best of both worlds. What do you mean you didnât see Prowl in the movie? You missed him? Ah-hah, just kidding! While we wish he was in the new Transformers movie we can only hope he shows up in the sequel. However I really wanted to make him and this is my vision of what he could look like. Obviously heâs modeled after the 08 Concept Camaro as Bumblebee is but styled in a police-theme. Prowl has a super-slick-n-shiny paint job, clear red lights on top (sorry, couldnât make them light up this time, no room for the electronics) metallic weathering and highlights on his robot form, and awesome police-decals! He has an all-new head too and transforms basically like the 08 Bumblebee. You can adjust his chest section if you want but I leave it flat for a more G1/Alternator Prowl look. Iâll include a weapon or two later in the auction, I was pressed for time and didnât get them finished just yet. I also apologize about the blinding white on him, my camera really picks up light colors and there's a lot of detail that's blurry there. Sorry about that! Trust me tho, he looks stunning up close! So, need a cool cruising cop for your collection? Know a friend with a shelf full of police cars? Then donât pass this auction up!"

I would like to thank the person that came up with these fine avatar and signature's.


Join Date: Jul 2007
Posts: 6
That's pretty cool, especially the robot mode. I really like the head... The paint looks a little on the thick side though. Must've been hard covering the yellow without it bleeding through...
Bombhunter is offline
Quote Quick Reply
post #4 of 11 Old 01-02-2008, 11:58 AM
Chuggernaut
Member

Join Date: May 2006
Posts: 178
That is pretty cool. It would be icing on the cake if the weapons wound up being twin shoulder cannons reminiscent of what Prowl had in G1. 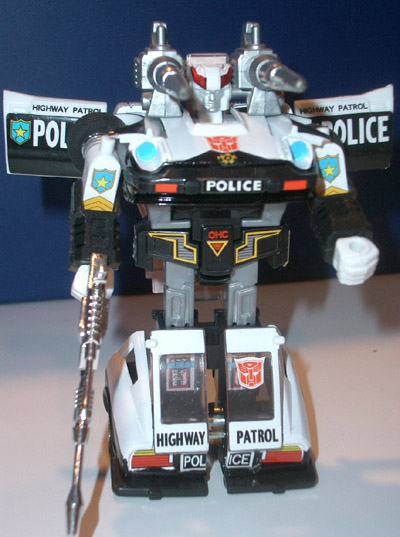 Join Date: Mar 2006
Location: Detroit, Michigan
Posts: 9,152
Very nice - I found this ebay link for his work - I have not seen any auction listings for that Camaro though - anyone have a link?
Joe :: Over Anxious 67 Camaro RS/SS L78
5thgenblog.com
First gen Camaros on Instagram // My ebaY auctions
OverAnxious is offline
Quote Quick Reply
post #6 of 11 Old 01-02-2008, 03:50 PM
Luwinkle
Veteran Member

Join Date: Jul 2007
Location: Louisville, KY
Posts: 10,420
Quote:
Originally Posted by Chuggernaut View Post
That is pretty cool. It would be icing on the cake if the weapons wound up being twin shoulder cannons reminiscent of what Prowl had in G1.

*giggle* it has OHC on the crotch-plate.


Join Date: Jul 2007
Posts: 6
Quote:
Originally Posted by OverAnxious View Post
Very nice - I found this ebay link for his work - I have not seen any auction listings for that Camaro though - anyone have a link?
His Megatron is slick with the flashlight and red laser in the scope.
Bombhunter is offline
Quote Quick Reply
post #8 of 11 Old 01-02-2008, 09:53 PM
LT16SPEED
Veteran Member

Bob Lutz: "There's no doubt that a design-driven philosophy is the only one that will work. People who are not sensitive to design, people who don't care about vehicles, people who view a vehicle as an appliance, they just default to Toyota. We will never win that one."
LT16SPEED is offline
Quote Quick Reply
post #9 of 11 Old 01-03-2008, 06:29 AM
urbanlegend
Veteran Member